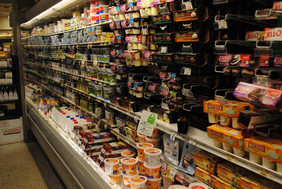 Overview on supermarket shelves: The Nutri-Score serves as an orientation guide for assessing the nutritional value of a product.

The consumption of food with a poor nutritional quality is associated with a higher mortality rate, according to a study published in mid-September in the BMJ. The results support the use of Nutri-Score labelling on the front of the pack to guide people to make healthier food choices. This could feed into the ongoing discussions on the standardization of food labeling systems in the European Union.

In Germany, there is currently no mandatory labelling of food, e.g. with the Nutri-Score. For years, the responsible Minister of Food and Agriculture spoke out against colored labeling of food. Last September she gave in and announced a corresponding amendment to the law for 2020. The Nutri-Score ordinance is due to come into force in autumn and the labelling is to be introduced throughout Germany. Before the nutritional traffic light appears on products in German supermarkets, the approval of the cabinet and the Bundesrat is required. The EU Commission must also give its permission.

It has long been known that the labeling of food packaging with simple, clear nutritional information helps people make healthier decisions to prevent non-communicable diseases such as heart disease, cancer and diabetes.

In the current study, an international research team attempted to determine whether the Food Standards Agency's Nutrient Profile System (FSAm-NPS) is actually related to mortality. Their results are based on 501 594 adults (average age 52 years) from 10 European countries who participated in the European Prospective Investigation into Cancer and Nutrition (EPIC) study.

The subjects had to fill out questionnaires to assess their usual food intake. An FSAm-NPS index was calculated for each individual based on the nutritional quality of the food consumed. The higher the index value, the lower the overall nutritional quality of the diet, which is reflected in a lower intake of dietary fiber, fruit and vegetables and fish and a higher intake of red and processed meat.

Participants were observed for an average of 17 years. During this time, the researchers found that those with a higher dietary index score had an increased risk of all-cause mortality and of cancer and circulatory, respiratory and digestive diseases.

"In addition to the introduction of 'incentive levies to increase the consumption of healthy food' and of 'targets or standards for the composition of industrially produced food', the so-called front of pack labeling, i.e. the simplified 'nutritional labelling on the front of packaged food', has been rated as one of the top reform indicators for improving nutrition in Europe - by independent experts, scientists and multipliers from public health, nutrition science and health reporting, e.g. BIPS, the European Commission, WHO and RKI. Nutri-Score, the traffic light system or key-hole model are designed to help consumers make healthier food choices," says Dr. Antje Hebestreit, head of the Lifestyle-related Disorders Unit in the Department of Epidemiological Methods and Etiological Research at BIPS, which is working on the measurability of the effectiveness of policy measures in Europe as part of the Policy Evaluation Network (PEN).

The fact that such a score can have a significant influence was also recently demonstrated by another PEN working group: In the "Healthy Food Environment Policy Index (Food-EPI)" it evaluated political measures at EU level that have a (potential) influence on nutritional health in the EU member states. They identified nutrition index scores as a key building block. German experts recently evaluated the degree of implementation of the Food-EPI in Germany relative to international best practices.