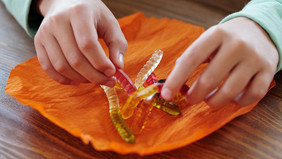 How can children be protected from unhealthy foods?

A media-using child in Germany sees an average of 15.48 commercials for unhealthy foods per day. Of these, 5.14 are on the Internet and 10.34 on TV. Simultaneously, the number of TV commercials per hour has increased by 29 percent.

That's the finding of a study by the University of Hamburg, Germany, presented in March and still based on data collected before the Corona crisis. On average, 92 percent of the food ads children see on the Internet and TV were related to unhealthy products such as fast food, snacks or sweets (TV 89 percent, Internet 98 percent). In view of these figures, an alliance of scientists, pediatricians and the German AOK association renewed its call for a ban on children's marketing for unhealthy products in all types of media - as is already standard practice in many countries. The study was funded by the German Alliance of Non-Communicable Diseases (DANK), the German AOK association and six medical societies and organizations.

For the study, economist Dr. Tobias Effertz analyzed the advertising contacts of children aged 3 to 13 for the period March 2019 to February 2020 for Internet and from June to September 2019 for TV. In addition to the company's own surveys, the study was based on data from Nielsen Media Research on children's Internet surfing behavior and the reach of websites, as well as data on received advertising. The assessment of products as healthy or unhealthy was based on the Nutrition Profile Model of the World Health Organization (WHO), which was developed specifically for children. The evaluation referred to children who use the Internet or TV.

The results are alarming: 70 percent of the food commercials on TV examined are aimed specifically at children through their presentation or broadcast environment. 89 percent of all TV commercials advertise unhealthy products. The number of commercials seen by children per day has remained about the same since 2007. But children today watch 30 minutes less TV. So 29 percent more unhealthy spots are aired per hour than in the past. "Companies have deliberately increased the advertising pressure on children," Sigrid Peter, MD, a pediatrician in Berlin and vice chair of the Professional Association of Pediatricians and Adolescents (BVJK), criticized the current state of affairs when the study results were published. "We see the harmful health consequences of this every day in our practices. We must finally address the causes of childhood obesity - and advertising is an important factor in this."

On the Internet, children are reached primarily via Facebook with advertising posts about unhealthy products - more than ten billion times a year in Germany. In addition, companies specifically lure children to their websites for unhealthy products and try to keep them there for a long time by playing games or the like. On YouTube, two-thirds of the advertising for unhealthy things with children's marketing is done by influencers.

"More than 15 times a day, our children are encouraged by the industry to eat more sugar, salt and fat," criticized Professor Dr. Hans Hauner, head of the Else Kröner-Fresenius Center for Nutritional Medicine at the Technical University of Munich and chairman of the German Diabetes Foundation (DDS). "This nullifies all efforts to educate people about healthy eating and must not be tolerated any longer. These advertising activities in the digital media are increasing rapidly and are particularly effective." Especially since there is evidence, he said, that advertising can have an even stronger effect than a good role model set by parents.

"The study shows once again that there is obviously no assumption of responsibility or support to be expected on the part of the food industry," said Dr. Kai Kolpatzik, head of the Prevention Department at the AOK Federal Association. "It is therefore high time to hold this industry accountable. Because voluntary commitments, whether in the context of the National Reduction Strategy or the advertising ban on children's food, have so far come to nothing."

A legally anchored advertising ban is also demanded by the scientific alliance German Alliance Non-Communicable Diseases (DANK): "Diet-related diseases have also been shown in Covid-19 to be fatal risk factors for severe courses of disease and deaths," said DANK spokeswoman Barbara Bitzer. "Many deaths could have been prevented if policymakers had taken action against obesity earlier. That's why a ban on advertising is now more than overdue."

In April, the German Minister of Food and Agriculture, Julia Klöckner responded to growing criticism and called on the Central Association of the German Advertising Industry (ZAW) to further tighten the rules of conduct for food advertising aimed at children. "There was no question in my mind that the rules of conduct must be tightened. It is important that it happens quickly and effectively. Because advertising must not tempt children to eat unhealthy food. This applies to all channels - on television, online platforms or social media. It was particularly important to me that the circle of protection be expanded. That's why it was overdue for the age limit to be raised to 14. Children are now much better protected," the minister said in a press statement.

According to the ministry, the ZAW has complied with these demands and has adapted its rules of conduct as follows:

"I expect that the adapted rules of conduct will also be applied consistently in practice - we are keeping an eye on that," Klöckner continued. Should the application of the new rules of conduct prove insufficient, she said, it does not rule out stricter state regulation. In principle, according to the minister, the responsibility lies with the states, which must review the effectiveness of their existing regulations and, if necessary, make adjustments in order to consistently fulfill their responsibility in media policy when it comes to implementation and review.

Two things are striking about this rather unconventional choice of words by the minister: It continues to be voluntary self-governance by the industry, which, as the Hamburg study showed, has not worked before. She also assigned the topic to media policy, pointing out in this context that the states are responsible for this. However, it would also be possible to evaluate food advertising aimed at children in the same way as tobacco advertising - in which case the responsibility would lie with the federal government.